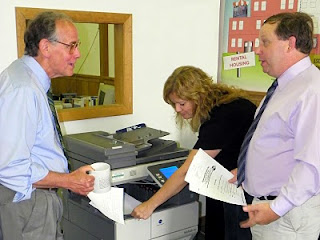 On this past Saturday afternoon I read this from Ken Stewart on linkedin:

Answer Charlie's Question: "How is the MPS market growing if its goal is to reduce prints?"

To which I answered:

It's not really about reducing prints so much as it is about reducing the cost of the prints. If being a print Nazi was what MPS was about (and some MPS providers are just that to their customers end users) then this industry would be futile.

This got me thinking...

Since April I have connected with about 300 businesses. If nothing else I have been able to garner one valuable insight. Other than maybe within the context of the medical field and or folks involved with law or government offices, the paperless office is at best a myth.

Out of the 300 aforementioned businesses only one person in one of those organizations had actually made a shift to the paperless office and they still had a printer... "just in case".

I have found that even the people who like the idea of a paperless office become a bit more reserved when all of a sudden they ask for a print out from their receptionist and there is not one available because they are now "paperless".

The simple fact of the matter is that human beings who work in an office setting (sans some atypical types) have developed an emotional connection with printed documents (whether they realize it or not). I can't tell you how many people I know who print e-mails to show other folks the e-mail, which of course could have been done without the printing of said e-mail.

To illustrate the concept further I would like to point to a less office oriented form of print. Books. Unlike newspapers whose fate seems to be teetering between extinction and an existence of novelty and antiquity, books have not wavered in popularity as much despite their digital nemesis.

I propose that this is due to the emotional power that books have over people. There is a strong esoteric pleasure in the indulgence and enjoyment of the cover art, back cover description and the feeling of a book in hand. Not unlike the lost art of buying a band's album for the same reasons, the book has yet to be fully replaced by e-readers and other technological offerings and while I know there is a huge difference between a good book and a simple office memo, the latter still has a bit of a connection to the emotional power of the former.

With that being said, I say that the "paperless office" is nothing more than futurist mythology that will never be...

Although, depending upon what the future holds for our freedoms in any government I suppose the possibility of the paperless office could manifest within the context of the unsavory power structure of a dictatorship (either within a company or, God forbid... a nation).

I suppose time will tell... What do you think?
Posted by Unknown at 4:45 AM