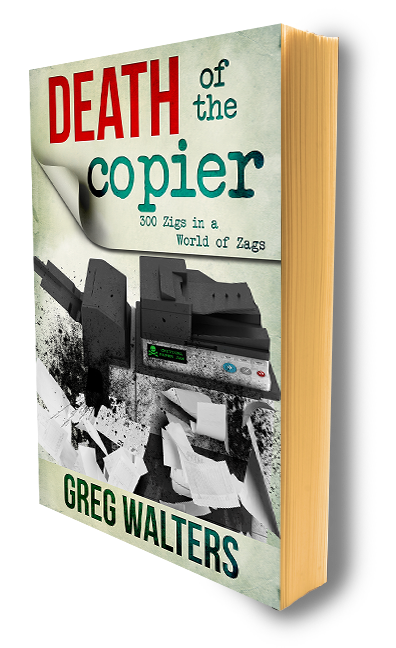 It's me, the suddenly reclusive (and now shamelessly self plugging) Dubious Monk!

That's right folks I, Nathan Dube have returned! (at least for the moment and possibly longer). So where have I been you ask? Selling MPS and (GASP) copiers! Crazy eh, Greg? Well to be fair, it's mostly A4 MFPs which are selling like hotcakes....

So why post now? Do I have new industry relevant prophetic views of the times we live in and the times to come? Am I returning from the shadows to destroy more printers? Well...

I am simply popping in to say hello and THANK YOU to the man, the myth and legend himself Mr. Greg Walters! I must admit, I only just purchased his book (pictured above) recently and was charmed to find that my blog is listed as suggested reading and I am listed as a "Leopard" which if you are familiar with DOTC you will understand, if not... BUY the book!

No really, buy it. Greg's content always has been cutting edge and ahead of the curve while also being quite hilarious, provocative and borderline offensive (at times). All things that drew me to the death of the copier blog in the first place.

Greg is by far one of the (if not THE) greatest minds in MPS and the realm of office imaging professionals in general. If you are currently in and/or are planning to enter the MPS industry, this is a must read. End of story.

As for me, well... I said everything I wanted to about MPS in the content of this blog in posts past and until something new comes along I will not simply write to just meet the expected three posts per month that "professional" bloggers are called to manifest.

When I have content worth sharing, it will pop up. Furthermore, you may see posts from additional authors here should things proceed the way I think they should.

Hoping you are all well and wishing you a happy holiday season! 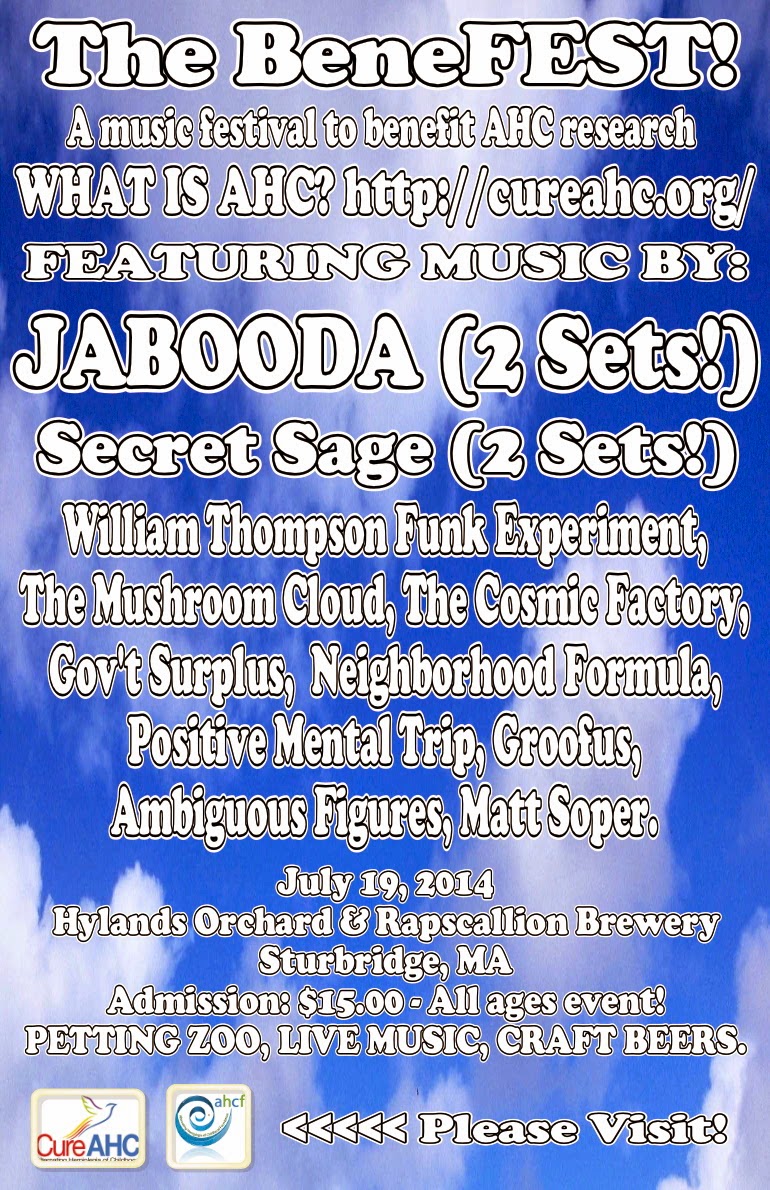 We Closed The Loop 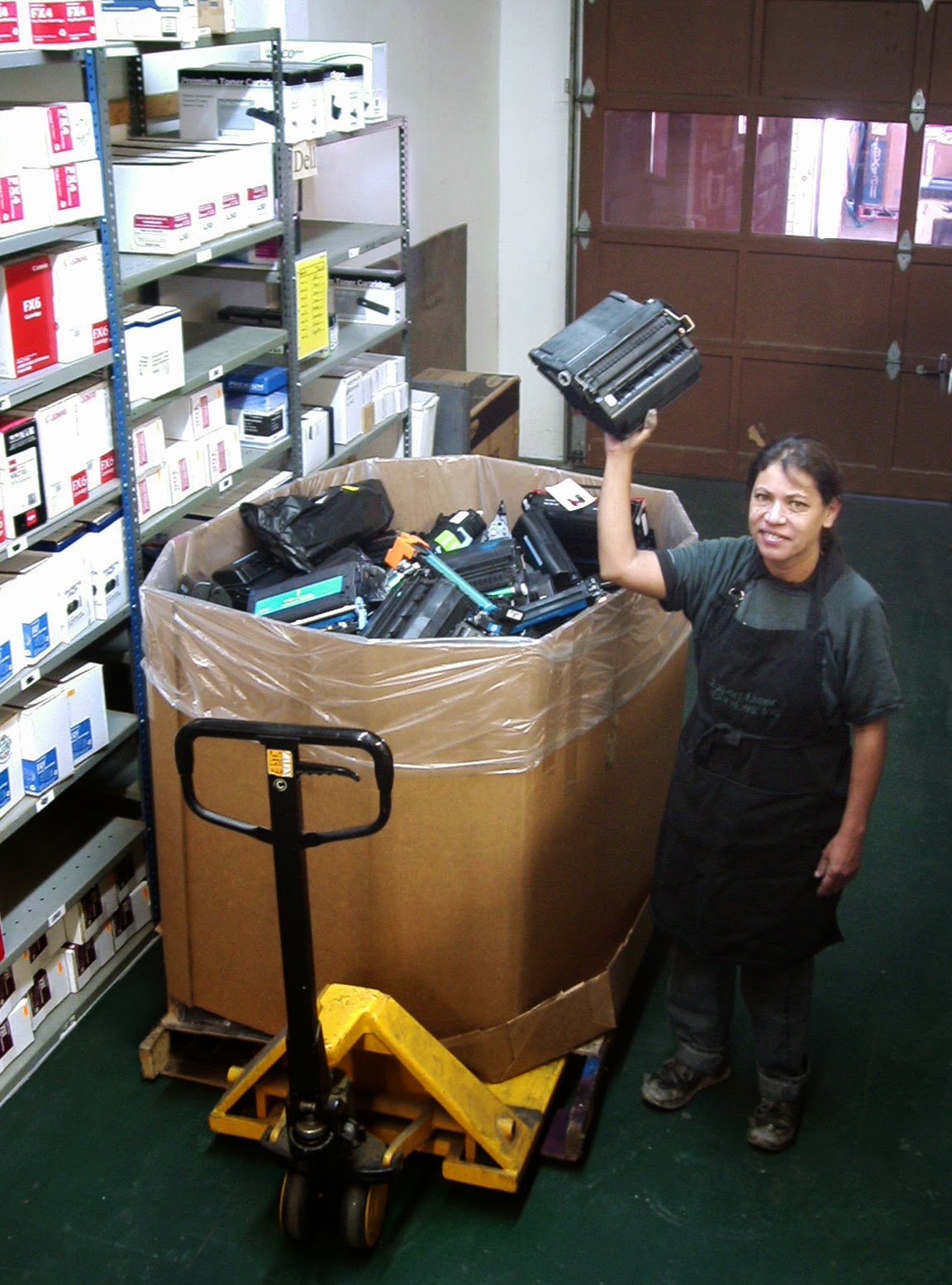 From the Telegram and Gazette:

"SOUTHBRIDGE — Expert Laser Services, based in Southbridge, has long been an environmental champion since its inception as "Expert Laser Recycling" in 1990. But, until recently, there has always been a missing link in the recycling chain.

"Our process always made us 'the greenest of the green' when it came to toner cartridge recycling," claims company president Mike Carpentier. "Cartridge cores are routinely turned 8 to 10 times in our system. Most programs—even global manufacturer-based programs—get only a single re-use of cores, then they are shipped off to a landfill."

"Still, like every remanufacturer, we eventually found ourselves having to toss cartridge cores into the trash. There was simply no way to recycle them. Konica Minolta's Clean Planet Recycling Program changed that. They've closed the recycling loop for us. Now we can recycle all major consumables — including toner cartridges, imaging units, waste toner bottles, developer units and drums."

Read the whole article here.
Posted by Unknown at 5:43 AM 0 comments

It's Not Easy Being Green!

Kermit sang that “It’s Not Easy Being Green”. Businesses, homes, organizations, and even countries are discovering that Kermit was right. It’s not easy being green. Does that mean that being green isn’t worth it or worse, is it counterproductive? Well, let’s consider the options.We can make a concerted effort to make our homes, workplaces, and world greener. Or, we can continue to waste and throw away whatever and whenever we choose. Certainly the option to do whatever, whenever, sounds better. It also sounds more American. It sounds more like freedom. It sounds more carefree. Surely this is the correct choice. Not at all, and don’t call me Shirley.

Landfills are growing. The Earth is groaning from waste and decay. The resources we want for our very livelihood are dwindling. We really should make every effort to reduce waste. But Kermit’s right. It’s not easy. After all, if it was easy, wouldn’t everybody be doing it? So, how do we make it easier on ourselves and others? There are thousands of small changes that each of us, businesses and individuals, can do to be greener. The first is to spread the word, not so much with dialogue but with knowledge about actions and techniques that actually work. The verbage out there says that we need to reduce our carbon footprints.

Well, one way to insure that your business is reducing its footprint is to stop wasting so much in the way of office imaging equipment and supplies. Simply put, start recycling your toner cartridges. Don’t just throw them away. Better yet, don’t return them a local retailer that is going to bulk ship them across the ocean. That’s not recycling. Think about it. You bring 3 cartridges to the local retailer. They are stored there, until the retailer has reached his capacity. Then, the retailer packages them on skids and ships them across to who knows where. This “recycling” procedure is incredibly wasteful too. It uses amazing amounts of shipping fuel, not to mention all of the plastic wrapping around the skids and such, just to move the empty cartridges. How do you avoid that? It’s pretty simple actually.

Call a company like ours, Expert Laser Services. We will pick up your empty toner cartridges and bring them to our local operation, right here in Southbridge, MA. Wait, that’s not all (I always wanted to say that). You don’t have to pay us a collecting fee. In fact, we will give you credit, for each cartridge, towards your next purchase of our 100% guaranteed quality cartridges.

So basically, you save money on supplies. You save expenses on staff time and effort. Best of all you help save the planet, all at the same time! Just by making one phone call, you have made your business greener. Then, you can sing with Kermit…

When green is all there is to be
It could make you wonder why, but why wonder why
Wonder, I am green and it’ll do fine, it’s beautiful
And I think it’s what I want to be

I am sure many of you (at least those of you who still follow this blog) are surprised to see this post. It has been almost a year since my last one. This is for many reasons. I had decided to take a break from bloging around this time last year and resume the craft within a few months. Around the time I had intended to start again, one of my most beloved friends died in a car crash.


While I won’t go into details, those of you who have lost people very close to you know this is a debilitating experience. By the time I had begun to get my head together months later, I simply had come to the conclusion that I was tired of writing about MPS. Everything I wrote up to that point could be condensed in a short sentence. “Either you are doing it right and succeeding or you are doing it wrong and are failing.


This has not changed and considering the fact that in addition to being my company’s social media manager I am a major account manager with many contract customers, I simply had less time to focus on the blog. Furthermore, the content I created with the destroy your printer contest is timeless and very effective in the sales process as I can drum it up on my smartphone in real life and show my prospects during initial sales meetings.


I simply came to the conclusion that for the time being the blog would remain “asleep”. I suppose I am writing today to let any interested parties know that if all goes right I hope to have some new content up within the year and a few promotional videos based on the lord of the rings type of mythology and a spoof on the Ghostbusters.


Now, you will notice there is a second author on this blog who has yet to post. Bob Chernisky, Jr. the son of our marketing manager also wears multiple hats in this company and is bravely battling through personal struggles in the same way I have while balancing his other responsibilities in the company.


It is our hope to bring life back to this blog in the coming months however I must point out… I will not be driven by the cliche admonition that I should writing three to five posts per month. I will write when I feel inspired and only then.


You see, I accomplished everything I set out to do when I entered B2B social media back in 2009 and I set a standard in managed print services in that respect, one which does not touch the mighty echelons of folks like Greg Walters or Art Post but I never wanted to get that deep in the waters anyway.


I wanted to create something magical and something fun that reminded people that we are human and even in the staunch and ultimately grey atmosphere of B2B industrial workings that we can still find that fun and that magic and use it within such a context to connect with other human beings.


While I did use social media to sell MPS, I don’t need it to do so. That being said, I do want to stay connected and will use this medium as a device for such ends.
Posted by Unknown at 6:28 AM 0 comments