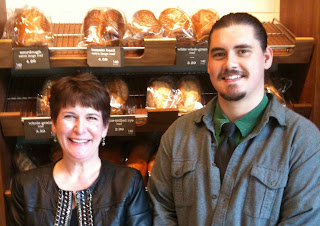 On Thursday of last week I had the pleasure of consulting a long time twitter follower about laser printer repair directly through twitter. The consultation which was in and of itself a rewarding experience ended in a sale. Yep, that's right...

Long time twitter follower and independent B2B Marketing Queen Dianna Huff, tweeted her frustrations about her HP 2015. In dealing with the issues of these machines as of recent, I quickly responded to her asking about the problems she was having in regards to said machine.

Bellow I have posted both Dianna's tweets as well as my own. 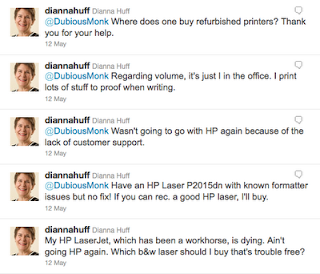 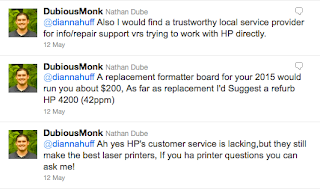 After going back and forth for a while I suggested two service providers in Nashua, NH where Dianna could look into service and sales however, she asked me to call her because she would prefer to purchase a machine from me.

However in the true spirit of the tweetup we decided to meet half way as to how it worked for Dianna's schedrule to be in Massachusetts. We were able to meet in person, discuss our careers within the world of B2B social media marketing and the challenges and joys associated with said work, while also completing one of the first ever direct through twitter sales (at least that I know of).

In retrospect, the cash ROI was trivial at best in comparison to the truly rewarding experience of connecting with another wonderful and talented human being who shared a passion for the same industry that I do.

Is this a glimpse of a possible paradigm shift in the world of marketing and sales?

I suppose time will tell.
Posted by Unknown at 6:14 AM