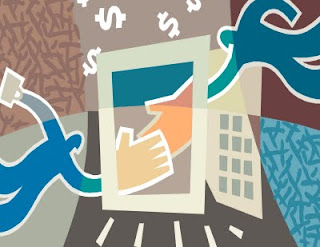 I believe that I have accomplished a unique acheivement this week.

Yesterday I signed a managed print services contract that was garnered through social media.

A few months ago David Morrow (a friend of mine which I had not seen in over 10 years) reconnected with me through Facebook after stumbling across my profile. In addition to listening to some music I had posted to my wall, he also took the time to check out my company's Facebook page and read a couple of blog posts I had shared there.

I guess he liked what he read.

Dave works at a company called Tech Cavalry as part of a team of IT professionals who offer services ranging from computer installations and repair to network design and implementation.

I guess you could say that they love computers and technology. Printers on the other hand, well...

Let's just say that said hardware is not their cup of tea. That being said, printers are not only our cup of tea but the very foundation of our company.

Dave felt that we are a company who share the same kind of passion for quality customer service that Tech Cavalry has and since he and his boss Michael had been looking to find a company with said qualities who would be able to take the reigns in regards to their customers printer needs, I was asked to come and meet with Michael to speak about the possibility of doing business together.

While my conversation with Michael spanned everything from cigars and coffee to VARs and MSPs and every dynamic in between, the conversation ended with a referral.

I was given information about a company not far from where I worked.

Thanks to that information I was able to perform an analysis, present an MPS solution and sign a contract for said solution with the aforementioned company in record timing.

Had I not been actively involved in social media, this opportunity would most likely not have occurred and even if it had, the lack of a reference to the gentleman I was able to get the referral from would have almost certainly made the process move much slower.

The point I would like make here is that if your working in a B2B environment and your not involved in social media then you are falling behind.

Social media is here to stay and chances are, your competitors are already ahead of the game.